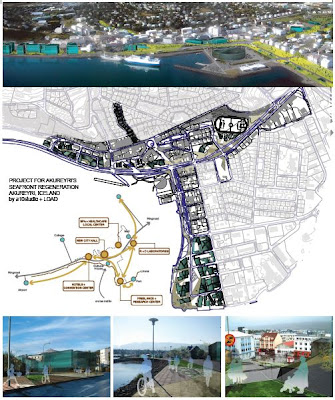 In the first half of the XX century, cities were thought as a clear organizational scheme, with a simple and predictable order, capable to be designed and planned in such way that the life quality of its residents could be modified manipulating the physical shape of the city. The result was a tragic social engineering effort, fueled by a scientific method in the form of urban planning that have dominated western societies the last 60 years, and now, unfortunately, the developing world. Urban systems everywhere, are just way to complex to be reduced to what conventional science can focus on.

The Contemporary Coastal city is the amalgam of invisible fluxes and visible materialization of information that operate simultaneously en spaces of global nature as also in spaces of local nature. To recognize this forces, fluxes and potentials is the challenge of any contemporary urban design or planning.

Related to this, in September (2008), the city of Dalian in China hosted the 44th International Congress of Urbanists, organized by the “ISOCARP“. The main subject of this event was “Urban Growth Without Sprawl”, one of the fundamental problems of urbanism practices these days.

To make an example about how cities behave, we must say that New York City, although having around 16 million inhabitants, doesn’t have severe problems for its development and governability, in contrast Lagos, the capital of Nigeria, has 12 million inhabitants and it is sinked in a severe state of underdevelopment and crisis without mentioning the very low life quality. In Mexico (as a country) one of the main problems has been the indiscriminated territorial expansion and the occupation of natural areas, originally designated to forests or agriculture, destroying at the same time very important natural resources. The lack of long term projects for the distribution of the population has also been the cause of so much floating population.

Fortunately seems action its being taken, at least in some cases. In this past International Congress of Urbanists, 7 projects were presented addressing Mexican development plans (none from Baja California Sur as far as i know). The group of mexican experts shown an interesting study realized in 2004, proposing an innovative “Metropolitan Management Model” which was applied to specific cases mainly in some areas of Cancun and the Yucatan Peninsula; all of this projects share a common interest in the sustainable development of the territory and the usage and preservation of the natural resources in the areas that this are developed.

The project for de Development of Lazaro Cardenas Municipality (Playa del Carmen), in Quintana Roo by CANO VERA + Territorios + AUS, takes as starting point the concepts of City and Region, generating its proposal based on identity at different scales: neighborhoods, parks and dwellings with simple solutions and with a low execution cost integrating innovative construction systems with the use of local materials and workers as also eco-technologies like re-feeding the underground natural water networks with rainwater, natural ventilations, optimized orientations and integration of the infrastructures with public spaces. They also make a big emphasis in promoting the pedestrian mobility, by planning the different areas of the plan not more than 5 minutes far from each other (housing from parks or commerce, and vice versa), the urban development will enhance the social interaction.

The STRATEGIC PLAN FOR URBAN DEVELOPMENT 2030 for Cancun was also presented. This plan was awarded with the EXCELLENCE IN URBAN PLANNING prize in this same congress; Its main aspects are the master plan for the Hotel corridor in cancun as also the integration of irregular housing settlements and to add its territorial reserves designated for housing up to year 2030, without forgetting to connect and revitalize downtown and its connection with the hotel strip. In terms of mobility, the plan contemplates to improve the vehicle infrastructure and the integration of bicycle paths (linked to public sport areas and infrastructures) and the update of the public transport system. On the environmental side it aims to protect the wells areas and the generation of a series of lineal parks to communicate the city, favoring once again the public space as the articulation of the city.

This interesting proposals are just a small spark of what we could expect in the near future for the development of urban strategies which will deliver better and more efficient urban areas, specially for those of us who live in a coastal setting which involves specific situations and agents that are not related to macro-scale urban settings like Mexico City of New York. In this case i should mention the massive emergence of new groups of study about the Coastal Cities, specially in Spain (no wonder why Spain is the number one country in tourism profits, and also no wonder why they have more than 60% of the investment in the area of Cancun), academic institutions like the IaaC (with their research about the Mediterranean coast of Africa), the Intelligent Coast group (and its proposals for the Mediterranean Spanish Coast) and the SUPERSUDACA collective (with the analysis of the latin american Caribbean) are some of the groups of research and analysis in sustainable urban development for tourism-based areas.

In our own very area of Los Cabos the young CAPA collective (formed by 3 young offices of Los Cabos area with international credentials) has been studying new alternatives for the sustainable development of our Baja territory, and im sure soon will be hearing more of them soon and hopefully we will show you some of the work that this research-based collective has been generating, if you wish to get more info or in contact with the guys at CAPA, visit their website at: http://www.capalab.net/

From all of this analysis we should realize that most of this proposals are still in their theoretical stage but they form a big database of proposals for the future of human settlements and territories. The urban strategies should always think ahead the administrative territorial capacities, in the cities it has become urgent to implement strategies for its economical and social development, unfortunately, most of times there’s no effective political and legal frame for the management of the urban settlements and its resources (natural, economical, social, etc); Today’s territorial management should be based in collaborative and relational processes which wont compete but complement each other, the coordination of local governments, social participation, the common project view, strategies and the efficient instrumentation is basic for the successful development of this new plans.

The sometimes huge difference between socioeconomic layers in the area, makes all of this even harder to manage, most of urban strategies and plans fails for lack of proper managementÂ and not because of a wrong planning. Â A good planning without proper management becomes “plain good ideas”. Â And good management without good planning only generates wrong realities.