“when was the last time a Modern and Illustrated State built an Arch or any other type of self-celebration monument?” asked the team composed by Michel Rojkind + Alejandro Hernandez + Arturo Ortiz in their presentation for their submission for the “Bicentennial Arch” in Mexico City.

Rojkind criticize like this the bicentennial project proposed by the local authorities of Mexico City, their proposal ordinates the vehicle traffic, expanded the green areas, would take 20 years to be built and will cost 200 million dollars.

It was suppose to be an Arch, but an arch built with 5 thousand social housing units on one of the main streets of Mexico City, Paseo de la Reforma. Michel Rojkind participated in the competition to commemorate the 200 years of the Independence of Mexico and betted to lose just to evidence the waste of resources (economical and intellectual) in an archaic project

“What are we going to celebrate? That the streets in the city are a chaos? That has been years since the last time there was a competition to do social housing in Mexico? That the people takes 3 hours to get to work? That the governors and political class, aiming to be remembered propose a project that will cost millions of pesos to execute it in a ridiculous time and closing Reforma and Circuito Interior (2 of the main avenues in Mexico City)?” Rojkind asks. 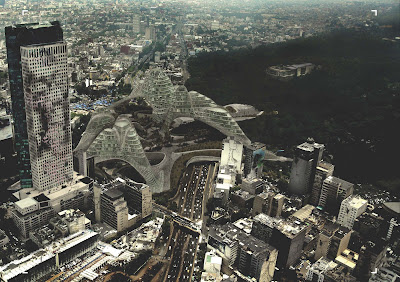 Rojkind was one of the 37 invited architects to the competition, and then he invited
Arturo Ortiz and Alejandro Hernández to develop the proposal. The 150,000 pesos that they received were used to design and evidence the actual situation of social and public infrastructure decay.

“From the 37 invited teams, one decided not to participate, i see that as the most radical stand, to say “i wont play this game because i think is stupid”, i believe our stand is more a political one, to say “we do not agree, because of this” and take it to a more radical side, but seeking to open a debate about public space and the inclusion of the inhabitants of the city.” Hernandez adds

their proposal ordinate the vehicle traffic, expanded the green areas, would take 20 years to be built and will cost 200 million dolars. Their presentation showed real actual problems like car traffic chaos or informal vendors in the area. 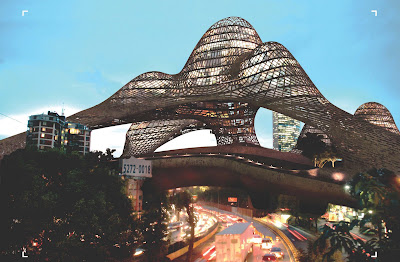 Due that the architects and people of the city wasn’t “invited” to participate in the decision of “how to celebrate”, the the team had the possibility to remember that architects have always a chance to take a more critic-political position, mentions Ortiz

“when was the last time a Modern and Illustrated State built an Arch or any other type of self-celebration monument?” asked the team to the jury in their presentation for their submission. 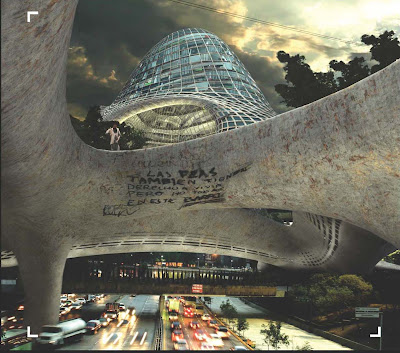 “You don’t need a big forehead or a lot of visas in your passport to know that this projects don’t happen often in the world, and whenever they are done, they are reason of laugh or fear, like when Sadam Hussein builds his “BLADES OF VICTORY”, emphasizes Hernandez. 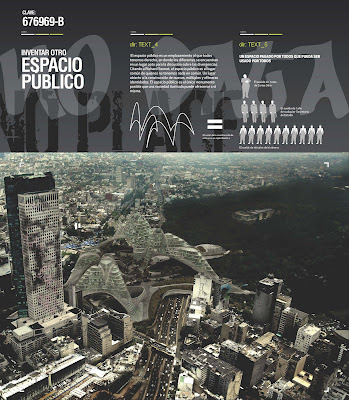 In their presentation boards the team showed that the cost of the project will be equivalent to: One Month of the salary of Carlos Slim (CEO of the mexican Grupo CARSO), or a Year of Salary of any State Secretary in Mexico, or also the salary of 100 years of 10 workers (in minimum wage)

with info of REFORMA.com and with e-mail conversations with the team.
Images property of Glessner Group courtesy of Rojkind Arquitectos, all rights reserved.